Niagara Pride Speaker Series: Editors of ”The Life and Afterlife of Gay Neighborhoods” 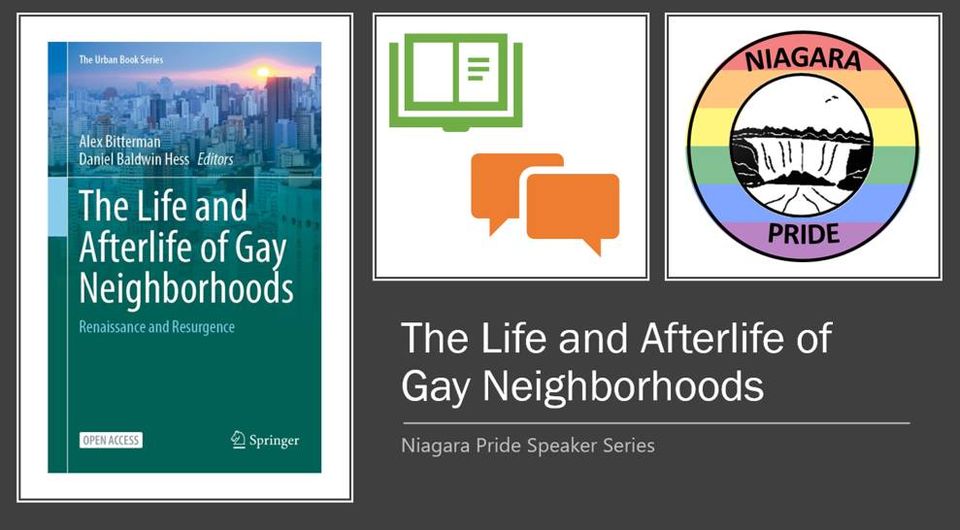 Join us for this free online presentation from Alex Bitterman & Daniel Baldwin Hess, the editors of ”The Life and Afterlife of Gay Neighborhoods: Renaissance and Resurgence”
The book can be downloaded for free here: https://www.thepeopleinyourgayborhood.com/
Join Zoom Meeting
https://us02web.zoom.us/j/83214479574
Meeting ID: 832 1447 9574
Phone: +16465588656,,83214479574#
About the Book:
This open access book examines the significance of gay neighborhoods (or ‘gayborhoods’) from critical periods of formation during the gay liberation and freedom movements of the 1960s and 1970s, to proven durability through the HIV/AIDS pandemic during the 1980s and 1990s, to a mature plateau since 2000. The book provides a framework for contemplating the future form and function of gay neighborhoods. Social and cultural shifts within gay neighborhoods are used as a framework for understanding the decades-long struggle for LGBTQ+ rights and equality. Resulting from gentrification, weakening social stigma, and enhanced rights for LGBTQ+ people, gay neighborhoods have recently become “less gay,” following a 50-year period of resilience. Meanwhile, other neighborhoods are becoming “more gay,” due to changing preferences of LGBTQ+ individuals and a propensity for LGBTQ+ families to form community in areas away from established gayborhoods. The current ‘plateau’ in the evolution of gay neighborhoods is characterized by generational differences—between Baby Boom pioneers and Millennials who favour broad inclusivity—signaling various possible trajectories for the future ‘afterlife’ of these important LGBTQ+ urban spaces. The complicating impacts of the COVID-19 pandemic provides a point of comparison for lessons learned from gay neighborhoods and the LGBTQ+ community that bravely endured the onset of the HIV/AIDS pandemic. This book will be of interest to students and scholars in various disciplines— including sociology, social work, anthropology, gender and sexuality, LGTBQ+ and queer studies, as well as urban geography, architecture, and city planning—and to policymakers and advocates concerned with LGBTQ+ rights and social justice.
Details